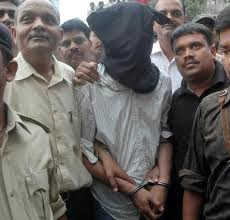 How influx of Bangladeshi migrants, terror is interlinked

Riazul Sarkar alias Akash Khan, arrested from Kishanganj on Saturday night in connection with July 13 Mumbai blasts, is in all probability a Bangladeshi who intruded into India. His arrest throws light on the problem of illegal migrants and how they pose a security threat to the country. Vicky Nanjappa reports.

[Photo from Bihar Post :As part of a nationwide crackdown on suspected terrorists, two persons were arrested in Bihar's Kishanganj district late on Saturday in connection with Wednesday’s serial blasts in Mumbai. The main suspect has been identified as Harkat-ul-Jihad-al-Islami (HuJI) operative Mohammad Riyazul Sarkar, said to be a resident of North Dinajpur, West Bengal.]

After the probe in the triple blasts in Mumbai started all eyes are on Kishanganj, a district in Bihar, from where Riazul Sarkar alias Akash Khan, was arrested on Saturday night. There is so far no clue of Sarkar's involvement in blasts and investigating agencies are still trying to ascertain whether he is a terrorist or just an illegal immigrant.

However, this case brings to fore the issue of illegal migrants, which is termed as a potential security risk to the country. Recent estimate suggests that nearly 20 million illegal migrants from Bangladesh have settled in the country. They have fanned out across India, but a majority of them are seeking refuge in West Bengal and Bihar.

Intelligence Bureau reports most migrants come in search of jobs and end up working as construction labourers or maids in various parts of the country. There is no proper record on their movement, which makes the task of the investigating agencies tougher.

Kishenganj has today turned into a hub for such migrants. There are many men and women, who have found employment in and around Bihar and some have moved to Delhi. Their movement is controlled by touts, who also get a cut from their income, and they help these migrants send money back home to Bangladesh. The transaction of money along the borders is also handled by the touts.

It has been reported that the migrants residing in Kishenganj have been give ration cards and well as voter IDs. Giving them a permanent status makes it difficult of security agencies to zero in on them.

Many migrants indulge in petty crimes; some even get involved in terror activities. They do not plan or execute acts, but work as foot soldiers.

Pakistan's Inter-Services have been quick to rope in migrants taking advantage of their poor monetary conditions. They are often used for illegal gun trade or for supply for counterfeit currency. Some are also used to plant bombs during terror attacks.

What works to the advantage of terrorists is the fact that there is no record of illegal migrants and hence they can easily give a slip to investigators. However, this is no new trend. Investigation points that migrants may have been used in the 2007 Hyderabad twin blasts. "Terrorists often pick up migrants and ask them to 'place a packet' containing explosives at the target. Not aware of what the parcel contains, the migrants 'run the errand' for a mere Rs 1,000 at times," say sources.

It is Sarkar's arrest that has drawn the attention of the investigators to the threat of illegal migrants, who double up as foot soldiers. Some of them have been living in Kishengunj for 20 years and over the years their population is booming.

Police sources say that Bangladeshis often slip in and out of the country by paying the touts, who are in connivance with security forces at the border, a mere Rs 500. After carrying out a blast, they go back to their country never to return. Many have come to Kishengunj from West Bengal, which is a two-hour drive from the district.

An IB report on this issue states the number of illegal migrants from Bangladesh is on rise and most of them can be traced to West Bengal.

The report also adds that secret service officials from both Pakistan and Bangladesh have found to be working undercover in Bengal. Moreover, recruiters set up terror modules in the belts of Bihar, West Bengal, Tripura and Assam.

Experts point out that this issue needs to be tackled diplomatically. But to start with India needs a better database of people entering the country. Security agencies need to ensure that migrants are not given voting rights. Border security remains the key issue as such infiltration remains unabated because of low-raking officers posted on the border.

Posted by Bengal Spotlight at 8:30 AM