City of "peace" Kolkata is again connected with City of "blast" Mumbai. 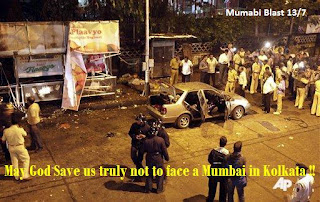 13/7.....strange combination of lucky and unlucky. Mumbai and Kolkata are connected again.

The city of “peace” Kolkata has

reproved to be a peace-killer once again. The memory of 26/11 has not even been rotten and now again we are forced to face a fresh 13/7. 13/7 is a nice combination of two numbers, one unlucky and other lucky.

This is not just a coincidence of numerology but significantly it speaks a lot. The Islamists are lucky and even the Hindus are unlucky.

Though the Triple blasts made at Zaveri market, Dadar and Opera House at Charni Road, the sleeper cell of IM was proactive and waiting for some good Jihadi news from Mumbai, the most proffered killing fields of Hindus by Islamists. Mumbai and Kolkata are connected again, as it is suspected by the investigative agencies. Reports came as it is, as it was.

This time again Kolkata and other eastern bases of the Islamists have been proved to be the safest haven for the Muslim culprits. During 26/11 communicational preparedness was carried out by Hussain Ur Rehman who was based at Metiabruz of Kolkata. He purchased 7 sim cards from Tiljala, Beniapukur and Maheshtala of Kolkata under direction of Yahya Mujahid, chief of HUJI sleeper cell based at Dhaka. Now the same Beniapukur area has gave birth to another tyrant, Shaikh Abdulla. He hails from the Mafidur Islam Lane in the locality. He is the right hand of Amir Reza Khan, the don based on Karachi who looks after the missions conducted by Indian Mujahideen from Pakistan. He has been promoted as its supremo. The Maharashtra ATS has asked details about two more operatives from Kolkata STF. Reportedly this man along with 14 terrorists had moved to Mumbai by train to carry out the strikes. To find these missing links the Mumbai crime branch has also asked the Kolkata STF the passenger lists for last 7 days prior to strike. The routes consists Kolkata to Mumbai and Kolkata to Kanpur.

It is noteworthy that two cadres of Indian Mujahideens were arrested from Mumbai just before a couple of days of strike. The two men revealed the names of two suspected terrorists based in Ranchi who are also attached to SIMI. 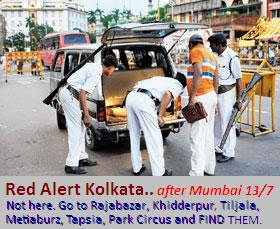 What we need to focus is that, we have been habitual to listen from all the surroundings that west Bengal is the only state where co existence with peace happens, after all Muslims are never stricken but yes, irrelevant how Hindus are attacked. West Bengal based Jihadists have been forefront when mission of Allah is to be conducted. West Bengal is standing on the Syntax. There is peace because Hindus have been forced by its governments not to retaliate against Jihadi activities.

There are several places in Kolkata where Afghan, Pashtun, Pakistani communal with no documents are openly cheering. In fact it’s not just limited to Kolkata, but too in Asansol, Akra, Ajimgunj and many other places in West Bengal including the neighboring states.

Dhanbad’s Waseypur is called “mini Pakistan”. Asansol locates several places whose demography is rapidly observing changes very drastically. I can shortlist a few, where illegal Pakistani and Afghan infiltrators live freely and only an investigation can easily figure out their deadly missions. 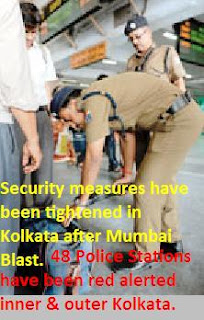 1> Hutton Road, behind Delhi Hotel and opposite to Maharaja Hotel. It has been safe havens for the Pashtuns.

The migration of Hindus has been caused by severe abduction of Hindu women, regular killing of Hindu males. The concerned police stations record several unsolved cases which number even up to century.

It’s quite true that the TMC brand change is positive towards Muslims and negative towards Hindus. And now again the culprits are only expected to go 'scot free'. No action against the jihadists will be taken in TMC regime too strangely on the line of CPM. What else made Kolkata STF ACP Soumen Mitra to maintain silence and deny answering the media questionnaire when Mumbai police was speaking free? Is it the political pressure? Is it that the police and TMC will go on some deal to go soft on the Jihadists? That the police never wanted to come the deeds by those Beniapukur Muslims out of Pandora’s Box? That the public never know what sins they have done? That the public be made fool that those jihadists were “innocent Muslims”?

Governments change, but some questions, some strategies, some tendencies, some treacheries and some tyrannies never CHANGE !!!!!!!!!!

Now read it : Mumbai blasts: Indian Mujahideen operative's Bengal link being probed ~ A Report in DNA. & Mastermind of 13/7 blasts established extensive base of SIMI in Jharkhand and West Bengal ~ A Report in Daily Pioneer.

Posted by Bengal Spotlight at 4:37 AM