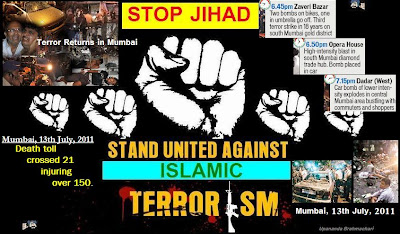 Chidamabram revises Mumbai blasts death toll, says 17 confirmed dead in terror strike
MUMBAI||TNN | Jul 14, 2011, 02.35am IST||: No other city in the world has been the tragic target of as many serial terror attacks and bombings as Mumbai, which went through the agony in 1993, 2002, 2003, 2006, 2008 and now July 13, 2011. On Wednesday evening, three serial bomb blasts in the span of ten minutes ripped through three of the busiest hubs in the city—Zaveri Bazar, Opera House and Dadar—at rush hour, killing 17 people and injuring 131.
The death toll in the terror strike was put at 21 last night with the number of injured pegged at 141. However, the figures were revised by Union home minister P Chidambaram after his visits to all the blasts site and a meeting with the state government officials. Read details in Times of India.

TERROR OPERA. Death and diamonds on road.... Read reports in Telegraph Kolkata.
48 Police Stations in and around Kolkata have been alerted alerted with whole of the State and Nation.
Posted by Bengal Spotlight at 12:21 AM