IT (Islamic Terror) Hunt in a Heaven of Peace called West Bengal.

As a part of nationwide crackdown on suspected terrorists, two persons were arrested in Bihar's Kishanganj district late on Saturday in connection with 13/7 serial blasts in Mumbai. The main suspect has been identified as Harkat-ul-Jihad-al-Islami (HuJI) operative. This HuJI pin Mohammad Riyazul Sarkar, is said to be a resident of South Dinajpur, West Bengal.

Arrested Riyazul Sarkar was a resident of village Malancha under Tapan Police Station in the District of South Dinajpur, as the local report delineates. In 2002, the family of Riyazul came to Nakarh village under Gangarampur to change the life of utter poverty caused by early demise of Riyaz’s father. Though some papers and media mistakenly reports that Riyazul is a resident of North Dinajpur, the bytes of channels and some residents of Kishanganj authenticated the arrest of Riyazul of Nakarh village by the special investigative team of police.

Riyazul has an education of primary level and he went to Mumbai five years ago for searching a job there. After that he was not a closer to anybody and his new friends were also so mysterious. Sometimes he used to go beyond the border of West Bengal to reach Bangladesh for some unknown causes.

Mr. Swarup Banerjee Purnapatra, Superintend of Police, D Dinajpur told the media that he has no specific information about Riyazul Sarkar in any case of terror involvement or whether had any Riyazul in Uttar Dinajpur as such.

But, now in another district of North Bengal, Darjeeling is put under a high alert as three suspected HuJI and Lashkar militants entered into West Bengal and sheltered underground near Siliguri, as the reports came in. Sources told that two of the Islamists are connected with HuJI and the third is an operative of Lashkar-e-Toiba. After the 13/7 triple blast at Mumbai, the Islamic militants are trying to hide in the sleeper cells of their operatives as their security reason and Islamist always prefer West Bengal as a safe zone for the Islamic outfits for a long time, before they attacked American centre in Kolkata in 2002.

It is believed those militants, Habib Khan and Golam Khan came from Coomilla, Bangladesh and the other Saukat Hossian is a Kashmiri. On 19th police captured one from Howrah Station and he is being interrogated to have some clue from him. The Intelligence Deptt alerted the matter through Home Deptt for tackling any situation of apprehended big attack in West Bengal.

As the missing suspects in 13/7, Abdullha is a kith and kin of Amir Reza of Mafidul Islam Lane, Kolkata, as bytes bite and the situation of pressure to crackdown the terror links in West Bengal, the police has been alerted in the northern border districts very tactfully including the other parts of West Bengal.

Ranveer Kumar, IG, North Bengal, asserted that the security check has been doubled very seriously after 13/7 in every places of Siliguri including New Jalpaiguri Rly station, Tensing Norgay Bus stand, shopping malls, crowded areas and Indian Oil Depots areas. Sniffer dogs are in searching clues and police in civil dress are covering day and night to futile possible blasts in Siliguri, Asansole, Kolkata or Kharagpur. Nobody in Delhi, Mumbai, Kolkata and Ahamedabad are in peace as these main cities in India are under the scanner of Islamic Jihadists. CBI has requested the Interpol to issue a red corner alert in this stake. 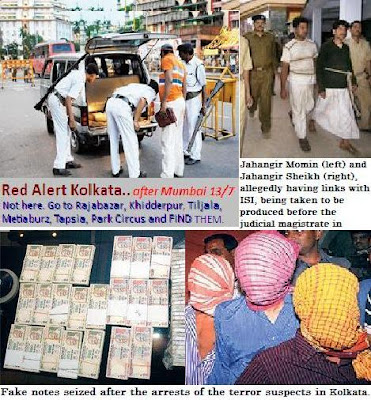 The arrested militant Haroon Sk., captured by Special Task Force of Kolkata Police from Howrah Rly Station on 19th, is primarily connected with Indian Mujaheedin He was captured by the information as given by another arrested suspect from Beniapukur Lane. This person of Beniapukur was arrested on the basis of the pictures drawn by the police detectives upon clues derived from key suspects of 13/7 Mumbai blasts, Riyazul @ Akash & Mehatab (HuJI) now arrested from Kishangunj in Bihar and Danish Sheikh (IM) from Baroda in Gujrat. But all of them have some certain connection with Kolkata, the safest place of the Islamic terrorist in West Bengal, Eastern India or may be the safest in India.

In this connection the ISI and DGFI have more excellently (though heinous) put the challenge before their Indian counterpart RAW, NIA, CBI or others. The challenge is now unbearable to the public.

In the last 34 years of Left Front regime, this bed of Islamic Expansionism was nurtured in the soil of West Bengal. Now Bengali Hindus are facing a provocative Islamic autocracy in the "Changed" hands of present Trinmool Congress-Congress regime. In this state of affairs, WB Hindus can only wait for a future dragged into nothing but a Talibani Terror as being faced by common Hindu people in Bangladesh and Pakistan or in a Kashmir that we are habituated not to see.

Haroon was allegedly in contact with suspected Indian Mujahideen operative Danish Riaz, who was arrested from Ahmedabad last month.

Twenty people were killed and several others injured in the triple blasts in Mumbai earlier this month. The police were looking for other suspects.
Posted by Bengal Spotlight at 7:29 AM

It is well known Muslims from West Bengal are becoming extrimists day by day. With the help of Bangladeshi Infiltrators and ISI they are dreming about Dar-UL-Islam. Bangladesh is a country filled with hardcore islamist fanatics. Even the so called secular Awami League is reluctant to hang Islam as a state religion of Bangladesh. ISLAMIC TERRORIST ORGANIZATION Jama'atul Mujahideen Bangladesh had wing in Malda,West Bengal. It is clear Muslims of West Bengal do not have any loyality towards India as Islam does not believe in Nationalism. Abdur Rahim alias Shahadat who played a key role in strengthening the banned Islamist militant outfit Jama'atul Mujahideen Bangladesh - in bordering districts of India's West Bengal state was arrested by Bangladeshi Police.
He operated for two-and-a-half-years in Murshidabad, Nadia and Malda districts of West Bengal on the instructions of JMB chief Shaikh Abdur Rahman and his deputy, Siddiqul Islam alias Bangla Bhai.

Rahman and Bangla Bhai, who operated in Bangladesh's Rajshahi district, were executed in 2007 following their conviction for killing two judges.

Police nabbed Shahadat Wednesday who on return from India had emerged as the chief organiser of 'Islam and Muslim', a new offshoot of the JMB that is banned in Bangladesh.

The intelligence officials along with the police also arrested Sajedur Rahman alias Hanif, a regional commander of the new organisation that has plans to 'dominate' a large area on Bangladesh'w western flank bordering India, covering Chapainawabganj, Rajshahi and Naogaon.

The intelligence officials also seized arms and ammunition and some books on Jihad during their drive.

2010 Deganga riots clearly indicates the unity of hindus in West Bengal- they are posting on facebook pages and muslims are posting on their cheeks. how can they be united when there is no political patronage and when they have voted cpi/congress/mamata so long? And still they are sleeping. but situation is mostly out of their control now and they can't change the situation suddenly. they are not a strong majority anymore. The development of the current situation is same as recursion in computer science, or chain reaction in chemistry.

The mob of the Muharram procession attacked a Hanuman temple located near Koley Para Primary School, 15 bombs were exploded on or near the HANUMAN temple by the fanatic attackers and as a result the temple was totally destroyed .