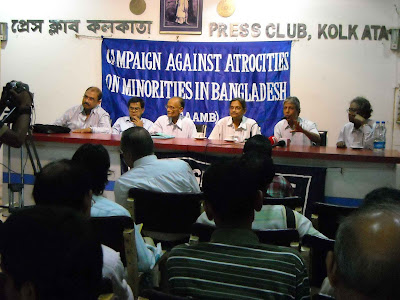 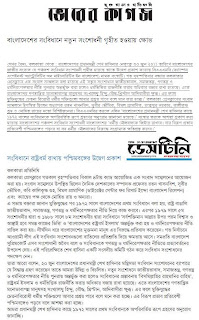 Endeavor of reigning Awami League-led Government in Bangladesh to retain “Bismillah ir-Rahman ir-Rahim” and Islam as State Religion through fresh amendment of Constitution, squashing hopes of secularists and Hindu minorities there of apposite restoration of Secular Constitution of 1972, and its feeble exculpation that some ‘realities’ forced it to do so leading to strong dissents there has touched the shores of Kolkata too and depiction of the same was witnessed in the recent press conference held at Kolkata Press Club under aegis of CAAMB (Campaign Against Atrocities on Minorities in Bangladesh), Kolkata-based human rights organization well-known for its struggles against minority persecution in Bangladesh, on 08/07/11.

It can certainly be said that this approach of Awami League Government has not only delighted and strengthened Islamic fundamentalists in Bangladesh but has terrified minority groups– on the way to oblivion, once more also. 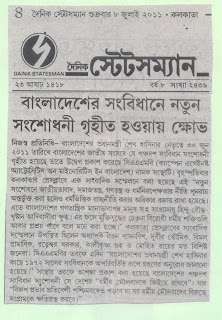 Speaking in the meeting Sri Ratneswar Sarkar stated apparently how the two-nation theory, propounded by MA Jinnah and Muslim League during the last days of British Empire, led to atrocities, anguishes and State-sponsored Hindu persecution in East Pakistan (now Bangladesh). He also congratulated organizers of the conference to be vocal against the latest nefarious design of amending the Constitution in Bangladesh, stimulating hard-liners there only, and put forward that Bangladesh must forsake this novel bid once and for all.

Sri Bimal Pramanik, at the inception of his speaking, made it clear that Sheikh Hasina, reigning Prime Minister of Bangladesh, had no role in the Liberation War of Bangladesh. As per him, despite making glorious sacrifices for the cause of Bangladesh, including in its war of Liberation from Pakistan, Hindus have virtually no position in the nation. He also stated that amendments of constitution and of Enemy Property Act on the anvil were flag bearers of worst. 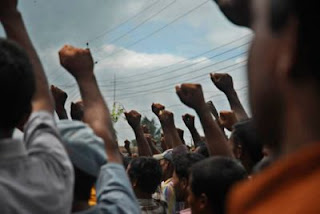 Dr. Ratan Khasnabis stated without reservation that Bangladesh had gone through a Pakistan-like situation for decades. In accordance with him, no nation can develop if not it admits all of its citizens devoid of discrimination. He also made it clear if Bangladesh degenerates more, a substantial portion of its citizens will lose faith on the nation. As per him, apart from Hindus and other minority groups, secular Muslims will be the greatest sufferers, and if the fresh amendment continues, Bangladesh will lose its legitimacy yet again.

Sri Kalikrishna Guha made it clear once all these rot sets in anywhere like Bangladesh, ill-fortune remains the one and only companion. He requested the Bangladeshi Government to rectify its stand once more and save the country from the impending doomsday, its settled effect.

Sri Subir Bhowmik citing his experiences in recent Sector Commanders’ Conference where it was reiterated time and again that Bangladesh, without any secular outlook, had no future, stated that the amendment was not a mistake but felo-de-se or self-annihilation. On the word him, even after lots of years, Awami League can’t win the election on its own. It can only if Bangladeshis opt for the party en masse. Speaking on the creation of Bangladesh, he posited with conviction had there been no Agartala Conspiracy Case 1968, Shiekh Mujibur Rahman wouldn’t have become BangaBandhu and also that despite being an ardent secular, Shiekh Hasina remains surrounded by a coterie of pro-Pakistan officials.

He was also found to stick a knife into Indian foreign policy for decades and recounted how it has miserably failed to differentiate between its friends and foes.

As indicated by him, India’s execrable offense in foreign policy scenario took place in 2001, period witnessing worst religious persecutions on Hindus in Bangladesh, when Brajesh Mishra, then National Security Advisor and Principal Secretary to Indian Prime Minister, A.B. Vajpayee, being the first foreign dignitary went to Bangladesh to congratulate Begum Khaleda Zia on her landslide in nation-wide election. It is alleged, BNP, political party of Begum Khaleda Zia, in tandem with Muslim hardliners, was accountable to inflict worst torturing on Hindus then.

Dr. Sabyasachi Ghosh Dastidar, through this brief speech, brought forth a new view; terming each and every development towards hard-line Islam in earlier East Pakistan and present Bangladesh as ominous to Hindus. He also made it clear that Bangladesh War of 1971 was a brilliant maneuver of Pakistani leadership to racially exterminate Hindus. According to him, an assortment of facts and figures authenticate outright that more than 90% of martyrs in War of 1971 were Hindus.

CAAMB (Campaign Against Atrocities on Minorities in Bangladesh) organised a Press conference at Kolkata Press Club at 4pm on 7 July 2011, Kolkata. On 30 June Bangladesh Government under Seikh Hasina passed the 15th Amendment bringing back the clauses of socialism and secularism in the constitution but retaining Islam as State religion. The meet was well attended. Mohit Ray (Convenor, CAAMB) initiated the meet with CAAMB’s protest against retaining Islam as State Religion in BD constitution and starting the constitution with Bismillah. CAAMB apprehended that it will encourage a new wave of Islamisation of Bangladesh and the Hindu-Buddhist-Christians will have to face the consequences. AdvocateRatneswar Sarkar (Gen Secy, All India Refugee Front) expressed his concern over the Islamisation and narrated his experience as minority in East Pakistan. Bimal Pramanik (Director, Centre for Research in Indo Bangla Relations) described the Islamic amendments brought by General Zia and General Ershad. He said Selikh Hasina lacks the spirit of liberation war and this is a betrayal to the all the secular and religious minorities. People voted her to bring back 72 constitution. Prof Ratan Kahasnobis (Economist, Calcutta University) expressed his concern about the developments in Bangladesh and feels this is also a danger for the secular Muslims there. Poet Kalikrishna Guha appealed to the conscience of Bangladesh to rise above fundamentalism. Subir Bhowmik, well known journalist, narrated his experiences with Bangladesh media and others. He was present in Dhaka seminar where about fifty organisations gathered to demand the restoration of 1972 constitution accepted under Selikh Mujibur Rahaman’s government. Prof Sachi G Dastidar of New York State University informed about their protest on this issue.

Posted by Bengal Spotlight at 11:31 PM

I am not sure whether you, West Bengalees have been awake all these years when Hindus and other minorities in Bangladesh were gradually loosing all the hopes for a decent survival in their country of birth. Many of you who left Bangladesh to settle in West Bengal are not totally innocent for the things that had happened to minorities in Bangladesh. As long as some Bangladeshi politicians called you "Dada" and fed you with Hilsa curry, you became pretty nostalgic about your childhood and forgot to ask the right question to these criminals. They have been taking our properties and women forcibly and you looked other way. Shame on you for waking up so late to the realities of Golden Bangladesh! The situation is worse than it was in Pakistan. Many Hindu properties have been marked with VP (Vested Property) stamp during Hasina's tenure and nobody has been putting any pressure on Bangladeshi government or land grabbers to stop this inhuman practice of slow ethnic cleansing . Last time, I checked our property, it too has a VP mark on it. The choice is to pay the big money and take the stamp off or loose the property to some powerful land grabber. How can we survive this daily torture? Needless to say if Hasina looses next election, many Hindu lives may be lost forever. It would be too late to save us but you can always have a great Hilsa dinner at Prime minister's residence and fly back to your dear Kolkata home. Thank you for your help!
Sincerely,
Mad, Bangladesh

OK, I am not done yet, I am hungry but nobody is feeding me since Bangobhandu's departure. You felt horror and asked how could that have had happened in our Golden Bangladesh? But, the very next day, you were OK. You probably attended some Tagore functions and forgot how we poor Hindus might be feeling. The next salvo was killing of four founding leaders and you paused and thought Bangladesh has gone mad. Yes, we are and my mind has changed forever. With no hope in the horizon a caged mad lion is better than a dead lion!
Is Didi a politically correct politician or can she call a spade a spade? I will be eagerly waiting for Didi to speak about my situation. Do I need to hold my breath? Thank you for now!
Mad, Bangladesh

Not a single reply/post since my last post. Where are you? I thought you, people love to write, read and chat? Maybe, new waves passing through your part of the world? Marx and Lenin do not tickle you any more? Did they remove the portraits of Marx and Lenin from the of office of chief minister? Is Didi welcoming back Tata to WB for a second time? Please, please, write! Anything!
-Mad

Dear friends,
Sorry for being absent from your site. I have started posting my thoughts and comments with Bangldesh Progressives. Please join us there if you want to ventilate your thoughts. We do need your inputs and advice. Thanks.
-Mad
Please link our site with yours!

A letter to our EU brothers and sisters.

The stat and increasing influx of Muslim refugees are pretty scary. The Muslim agenda of creating a Caliphate without a fight has become a true possibility unless EU citizens wake up to the reality. Many Muslims would not hesitate to lie to get a foot hold in your backyard. Only thing they need to tell you is that they are being tormented by their own people. You as idiots, take the stories seriously and provide these people shelter from their own oppressors. And, you feel really great because you have done something great and charitable? But you are wrong! Few years from your benevolent work, the person will rather seek a mosque imam than you to consult about his or her future. His or her imam might not object to him/her marrying a close cousin to import another Muslim man or woman to your backyard. And the cascade will go on until it is too late!
But if you are living in any Muslim country, they will make sure that you vacate their Muslim land, which might have been a infidels’ land not too long time ago?

I hope you got my point!

We can denounce Breivik (Norwaygian) for killing many innocents but people should be careful about whether they are taking right immigrants for their countries? Who needs the 7th century mentality at this time and space? Can Koran help us to solve our problem when it has totally failed where it was originally originated? What is so great about Islam? Please, help me, my Muslim brothers and sisters!
-Mad

Crying for help is not an option anymore! Mobilize and fight back the
goons!
-Mad
http://www.youtube.com/watch?v=SJYO26eIk_c&feature=related

Garga Chatterjee is not wrong but he is naive!

While Mr. Chaterjee can keep singing his secular Kumbaya song, the minorities in the East Bengal (Bangladesh) are being ethically cleansed from their ancestral properties since 1947. I am sure Mr. Chaterjee would rather blame us for not assimilating with the majority Muslim Bengalis while his ancestors just packed and left. His nostalgic feeling about East and West are pretty much academic and does not reflect the current intolerance in the East. I bet Mr. Chaterjee has never faced any of the Bangla-Bhai thugs in his life. Whether West Bengal would be called a Pygmy land, it would not be noticed at all in the East. Bangladesh will be expanding its border
across the West by the shear power of its demography. Only thing I can say is that he and his family might have been lucky to escape
from the East but he/his family might be facing the same music soon or later in his grandma's house in Kolkata?
-Fakir Kala/a friend of Mad