Are the Maoists in West Bengal lead by Chattradhar Mahato etc.,are different from the deadly Maoists in Bihar or Telengana ?? 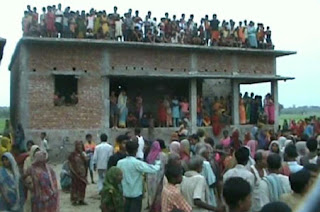 We have to read the following report and watch the video clippings at first.


Bihar: 16 people including 5 children killed in Naxal attacks .
..
NDTV Correspondent, Friday October 2, 2009, Khagaria
..
Just a day after the Indian Air Force asked for permission to fire in self-defence against the Naxals, they have struck again.
..
100 men armed with automatic weapons fired indiscriminately at innocent villagers in Bihar's Khagaria district. 16 people were killed on the spot including 5 children.
..
Ten people, suspected behind the Naxal attack late on Thursday night, have been arrested by the police.

..
The attack came after farmers defied a Naxal order of not cultivating a disputed piece of land. The victims belonged to a backward caste.
..
"Police and other administrative officers are present at the site. In a short while the revenue minister and the DGP will visit the area. The relatives of the victims will be given Rs 1 lakh. Rs 50,000 will be given to the injured as immediate relief from the state government and the CM's Relief Fund," said Bihar CM Nitish Kumar.
..
Meanwhile, many people gathered at the spot where the attack took place. Bihar Deputy CM Sushil Modi was forced to leave the area by angry crowd.
..
"The gunmen pulled the victims out of their huts, tied their hands and feet and fired at them, ADG Headquarters Neelmani said.
..
"Around 100 people, suspected to be Maoists, armed with automatic weapons attacked the village and fired indiscriminately late last night," Inspector General (Operations) S K Bharadwaj said.
..
Neelmani said the attack was carried out on the villagers by the suspected Naxalites with the intention of grabbing the land.
..
The victims had been living in makeshift camps on the land, he said.
..
Senior police officials, IG Operations and IG Bhagalpur are camping at the site and Special Task Force has been deployed for combing operations in the riverine area to nab them, Neelmani said, adding police patrolling has been increased as tension prevailed in the area.
..
Bodies have been kept at Morkahi police station from where they would be sent to a government hospital for post-mortem.
..
Bihar has seen a few deadly Naxal attacks in the last couple of months:
..
On Aug 23, five policemen, including an assistant sub-inspector were killed and two injured in a Naxal attack in Sono Bazar area of Bihar's Jamui district.
..
On April 22, a day before the country went to the polls in the second phase, four Naxal attacks took place in Bihar's Gaya, Aurangabad and Motihari. Naxals set on fire three oil tankers and five trucks killing 16 people killed.
..
According to data compiled by the Union Home Ministry, Naxal strikes on economic targets have progressively grown across Bihar, Chhattisgarh, Jharkhand, Orissa and West Bengal.
..
In 2006, 71 Naxal attacks were reported. In 2007, the number went up to 80. In 2008, the figures rose sharply to 109.
..
In the first half of 2009, 56 Naxal attacks have been reported. (With PTI inputs)
Courtsey : Zee News.

The screaming of the bereaved family members of Amdaicharua village has no meaning to the spotlight lover celebrities of SWAJAN and the Social Reformers in SUSHIL SAMAJ: the family members of Fighting People and the Real Intellectuals. But they are none to the victims belonged to Amdaicharua village and had been living in the makeshift camps on the land for cultivation. Still we have to believe that the naxalites are the friend of the poor common people, the farmers and the workers.

Surprisingly it was seen in the electronic media that one Bivatsa Chakroborty is condemning the arrest of Chattradhar Mahato, one Kaurav Sen is concerned about the procedure of interrogation and judiciary and one Seola Mitra is justifying their connection with the Maoist like Chattradhar. But hardly had they spent ever any single word to condemn the genocide and bloodbath of the common and innocent people generated by these Chattradhars and Cowteswars.

highly condemnable. But the disguise of a Maoist as a common farmer, trader, student, teacher etc., even as a journalist to penetrate into a new area or even set a grenade or plants a mine is highly appreciable to these SWAJAN and SUSHIL SAMAJ People. Very Good. The Police has no right to take Chattradhar in Bhawani Bhawan IB HQ at Alipore, Kolkata, binding his eyes in a black trap for the facility of interrogation. But Maoists have every right to kill the people in black 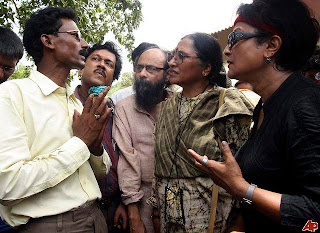 trap and binding back. The Police has made a worthless job to trap Chattradhar as a Singapore Journalist, not any Indian or Bengali Counterpart. ( So, the Bengal Journalists are very much annoyed). But the Journalists here have every right to collect a story or blackmail some one to grab some news or for simple blackmailing in the disguise of a 'Police in Civil Dress', 'An CID Official', as a 'Pimp' or anything else. Some times the SWAJAN and SUSHIL SAMAJ Men also act in the periphery of Social Journalism. Hari Bole !! Oh ! I mean to say... Chant the name of Lord Hari, as "Balo Hari Hari Bole !! Balo Hari Hari Bole !!!" It's Good for their health.

We should not disremember that in this year 37 people are killed in Maoist violence in West Medinipur, Bankura, Purulia and Jangal Mahal areas. But interesting enough the Maoists never find any Muslims in their class struggle to hell them as an enemy as classified as 'Sreeni Shatru'. The state CPIM published a list of 28/30 cadres of their own, all Hindus, murdered by the Maoist-TMC nexus, as per their claim, before the last Panchayet Election. Afterwards everybody killed in the Maoist attack or counter-attacks surprisingly belong to Hindu Community. It is not known, whether the Class Struggle of Maoist meant only against Hindu Bourgeois, Hindu Bureaucrat, Hindu Businessmen and anybody with a Hindu Brand ! !

The Diary of Chattradhar Mahato will disclose many things to us. There may not be one Sukhoshanti Baskey to be a custodian of Chhatradhar. Name of some Leela or Kavita may also come up. Chattradhar may not manage 1 crore booty out of his ideological venture. He may earn 1o crores in just Two Years. So what !!!

Is there any rule that any Maoist Leader cannot do like anything they like ? The Maoist can do their next carnage in West Bengal instead of Orissa, Bihar or Jharkhand. The line of Liberation says this. And we have mastery to exploit the sentiment of common people against the injustice and deprivation made upon them.

Posted by Bengal Spotlight at 12:06 PM