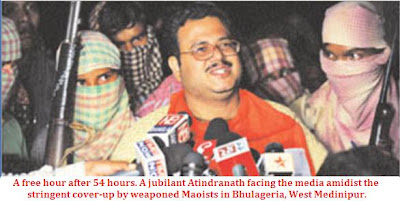 Atindranath Freed. Bengal never show down or bow down to Naxalites-Maoists.

As West Midnapore district Court has ordered the release on bail on 22/10/09 today around 10-30 am for fourteen tribal women and nine others after the government did not contest their bail petition, the maoist settings were full-proof to the stage of the release of kidnapped police official Atindranath Dutta in the after-noon.

Maoist leader Koteswar Rao alias Kishenji promised to release the police official but said the area where he is held hostage is encircled by a huge force of police and para-military and that was causing problems for the release. "They have to stop the operations and allow our fighters a safe passage after we release the police official," Kishenji said. The freed women hail from the troubled Maoist-dominated enclave of Lalgarh and those arrested general people are not connected with the Maoist activities so far. 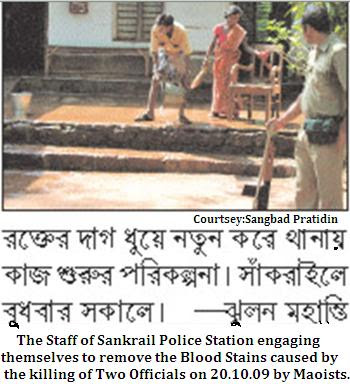 The Maoists leaded by Kishenji came to the contact with the both of electronic and print media in the process of releasing abducted Officer-in-Charge of Sankrail Police Station of West Medinipur, Sri Atindranath Dutta since last night. As such Sri Dutta was also hopeful for his release from the grip of Tanibanized Maoist of Bengal who shot dead rampantly to his fellow Police Official on Tuesday last in a cool blood and snatched away 6 rifles, 4 revolvers, 1 9mm pistol, 2 motorcycles and Rs.9 lakhs from a nearby State Bank. 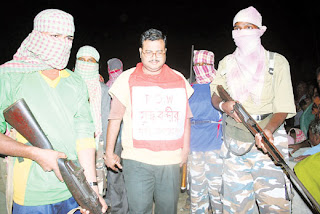 The situation reached a climax when Com. Kishenji freed the POW (Prisoner of War) at about 8.00 pm at Bhulageria Forest region a safe hide of the Jangalmahal Maoist in the presence of the Media Persons as Kishenji decided earlier to hand over the POW to the Media persons as the Bengal media embedded a good confidence in Koteswar Rao @ Kishenji,anyway. Kishen and his Maoist gang appeared with assault rifles in front of the media, showing thumbs to all the IPC and CrPC in that 'PWO Release Meet' i.e. 'Juddhabandi Mukti Sammelan'.

Kishen in his normal style tried to sensitized the media and his followers in his speech clarifying the Pro-People activities of the Maoists and the State Persecution upon the Jangalmahal people. This time Kishen condemned everybody, from Central Home Minister Chidembaram to State Chief Minister Budhhadev Bhattacharya; Sonia-Rahul Gandhi to Trinamul Leader Mamta Banerjee for their cruelty to support and promote anti-Maoist survillence in Jangal Mahal. In a very intelligent manner Kishen tried to repair the image of deadly Maoists to be a little generous by releasing OC Sankrail. But nobody in the media front had the carouge to question Koteswar Rao @ Kishen about the brutal killings of Late Dibakar Bhattacharya, Second Officer and Late Swapan Roy ASI of Sankrail PS. Kishen, his gunmen or any of his spokes-person in the disguise of intellectuals never feel any repentance for such cool blooded murder nor they convey any condolence and sympathy towards the bereaved family of Late Dibakar Bhattacharya and Late Swapan Roy.

Though a released and relaxed Atindra expressed his gratitude to the Maoists for extending all possible co-operation with him in the hostage, a concerned OC of

Sankrail expressed more security for all the Police Station in Jangalmahal for not a repetition in the next. However Mr. Atindranath Dutta reported him in Jhargram police Station before his re-union with his anxietied & aged parents, his weeping wife and his two years daughter, once who will be able to know this strangling situation of 54 hours afterwards.

posted by : Sambuddhha Gupta.
Posted by Bengal Spotlight at 10:03 AM