Never before in West Bengal. Maoist Killed Two Police Officers, Abducted the OC- Sankrail PS and Looted one Bank in a row. Deadly Maoists in Action 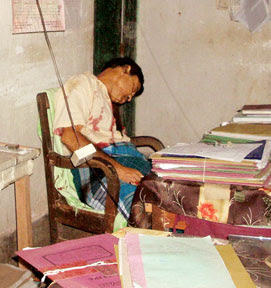 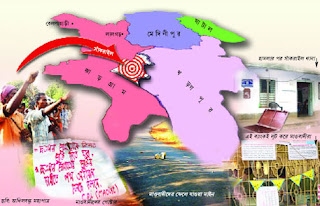 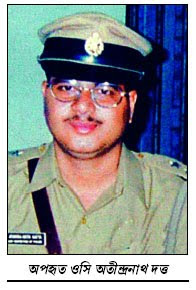 officer, Dibakar Bhattacharya and an assistant sub-inspector, Swapan Roy, before abducting the OC, Mr Atindra Nath Dutta. The O-C’s family pleaded to all concerned for his release.
The Left ultras looted at least six rifles, four revolvers, one 9 mm pistol, some ammunition and two motorcycles from the police station and looted cash from an adjoining SBI branch.
The incident occurred at a time when the DGP is in Midnapore town, supervising police operations against the Maoists in Junglemahal. Mr Buddhadeb Bhattacharjee convened a meeting at Writers’ Buildings and a police force has left for the spot.
Terming the incident as unfortunate, chief secretary Mr AM Chakrabarti said: “Our primary objective is to rescue the abducted police officer and arrest the culprits of this attack. The DGP himself is supervising operations there. The area is not known as a typically Maoist stronghold, but it is close to both the Jharkhand and Orissa border.”
According to police, a 22-25 member Maoist squad including women members of the Peoples Liberation Guerrilla Army from Orissa sneaked into Sankrail around 1.30 p.m. on two-wheelers. They split into three groups and raided the PS, the OC’s residential quarter and the Kesiapata branch of SBI.
They dragged the OC out from his quarter at gunpoint while another group damaged the radio transmission system of the police station and shot the second officer Dibakar Bhattacharjee and ASI (II) Swapan Roy who tried to hide under the table. Another group looted around Rs 10 lakh from the bank, located near the police station by firing at the bank’s cashier, who was unhurt.
Before fleeing, the Maoists planted land mines at Kesiapata and Guptamoni and Balibhasa on NH 6, the entry points to Sankrail. Later, owning up to the attack, CPI (Maoist) politburo member Kishanji said the abducted policeman would be released only if the government withdraws joint forces and releases Chhatradhar Mahato.
“We are appealing to the family members of the abducted police officer to launch an agitation in front of Writers’ Buildings. A timber-laden truck was torched by People’s Committee Against Police Atrocities activists on Ramgarh-Goaltore Road in Kadasole forest this evening. The chief secretary said those who are vocal against alleged police atrocities in tribal areas have to think whether they will stay mute after the attacks on policemen by Maoists.