Communist in Disguise. Devout Muslim in Principal and Practice. Just to launch an Islamic Communist Party of India ?? 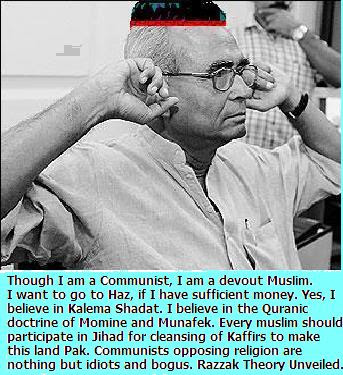 Indispensible Communist Minister in West Bengal waiting for a scope of journey to Haz.

and Land Reforms, Govt of West Bengal, the senior most CPIM Minister, just placed after the Chief Minister of West Bengal, Budhhadev Bhattacharya,as per Official site of the State, stated his belief of Islam unequivocally to media persons just published in the last week.

Whether the Communists are pro-muslims or the Muslims find the natural ally in the Communism - that may be a topic of further research but the Muslim Communists in Bengal are more pragmatic and fundamentalist than anybody.

Some years back in the event of Celebration of Bandemataram, another Marxist Minister Md. Kalimuddin Shams denied to utter Bandemataram as it contradicts with his religious belief and stated,"I am a Muslim first,then Indian or Communist. Islam is my first choice".

In the same way of thinking, Md.Abdur Razzak Mollah is now boosting his Muslim brethren to be more religious as him and to exploit communism just to grab the power of Bengal to establish a Muslim Bengal here.

In a report published in Dainik Statesman on 9th Oct, Razzak Mollah expressed his profound belief in Islam and as per his opinion, there is no contradiction of religion and communism at all. Hence, the conviction of " Religion is the opium to the mankind" does not bear any meaning to Mollah anyway.

Mollah said that he is an ardent follower of Quran and participate in Id-uz-Zuha and Id-ul-Fitar. And must believe in Kalem Sahadat and he offers Namaz for his purification, perhaps for the redemption from the filthy atmoshpher of Hindu Kaffirs attached in the Communist Party of India.

Interesting enough, his active participation in Communism since 1967 could not change him as a atheist like other Hindu Communist Kaffirs. And he is finding a scope to go to Haz after accumulation of proper financial strength.

This true picturisation of Razzak cannot make any retaliation in the CPIM Party as it happened in the case of a Puja in Tara Peeth by Late Subhas Chakroborty another veteran Hindu Communist Leader of Bengal.

Actually the land slide decline of party strength of the Communists in Muslim Community in West Bengal after the last Panchayet election fixed the CPIM in a dilemma. A section in the party wants to oppose Smt. Mamta Banerjee, the Trinamool (TMC) Supremo and the Central Railway minister for her unbound and record breaking Muslim Appeasement in every respect. But another section in the CPIM holds the way of Razzak in the convectional appeasement of Muslims in a contesting attitude.

Muslims in Bengal know this reality and Razzak Mollah also. So Razzak now shows his unhidden loyalty to Islam out of the helpful situation without any obstacle so far.Rather Razzak wants to regiment Islamic force behind him to be the Chief Minister of West Bengal. Some days ago this Razzak surfaced the so called discrimination of Muslims in job and social participation and his chance to join TMC if the Muslims get sufficient jobs in Railway Department.

The Congress, Communist or TMC are not the factors in Politics for the Muslims. It is their Poly Tricks of Islamic Solidarity to grab the power with in all the parties and in all parts. Razzak Mollah proved it and Inshallah, He shall prove it again.
............
posted by : Sambuddhha Gupta / Spotlight Media Team
Posted by Bengal Spotlight at 1:54 PM